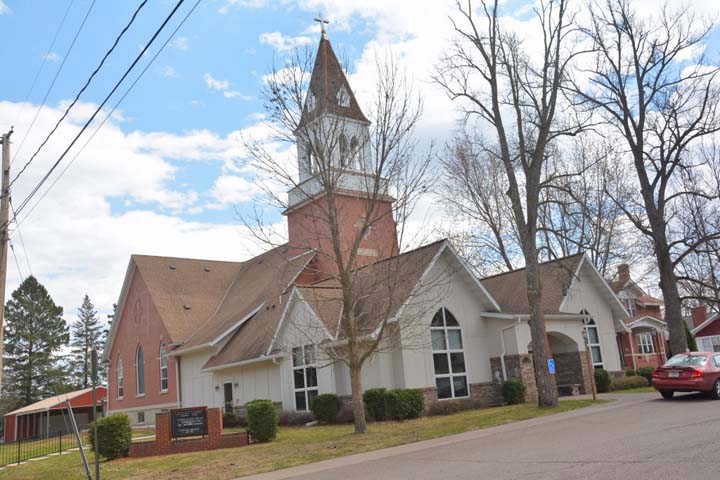 Compiled by Laurie K. Sommers, Preserve Nordic Churches Project Manager, 2017-2019, based on emails by Asta Twedt and shared with her permission

There is a lovely land

Where Danes have taken a stand:

Have planted staff and taken root

This is the opening verse of “The Askov Colony Song,” written by R. Nortvig and translated by Hertha Hansen.  The song references the 1906 founding of the historically Danish enclave of Askov (then called Partridge), Minnesota, by the Dansk Folkesamfund (Danish People’s Society), a group of Danish Evangelical Lutherans who sought to promote Danish settlement and culture in America. “Betlehems Dansk-Luth. Kirke” was organized shortly after the Dansk Folkesamfund arrived, and the current building dates to 1914-15. Jes Smidt, the notable master carver from West Denmark, Wisconsin, designed the church and created the altar, pulpit, and altar painting. (For more on Smidt, see the Woodcarving section under the Folk Arts and Traditions tab on this website.) 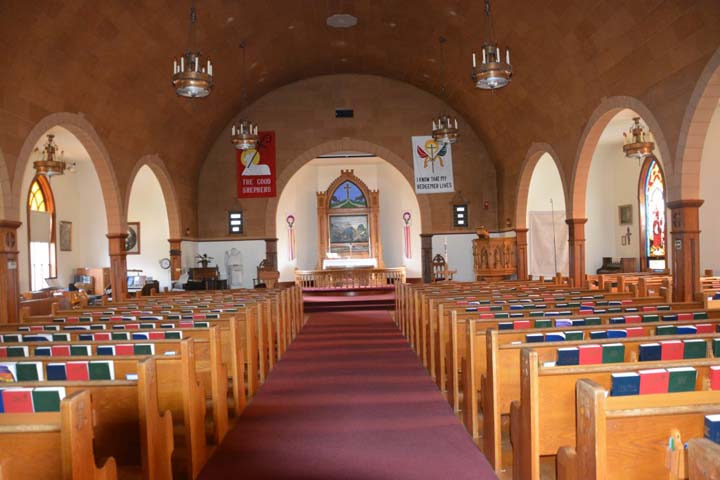 What was it like to grow up in a Danish American community and church during the mid-twentieth century?  Asta Twedt lived in the parsonage next door to Bethlehem Lutheran from 1946 until she graduated from high school in 1963.  The church was a “Happy Dane” congregation that followed the teaching and writing of nineteenth-century Danish theologian, N.S.F. Grundtvig. Grundtvig promoted a holistic approach to faith, including integrating Danish folk culture into the life of the church.

Beginning with her father’s pastorate in 1946, Bethlehem Lutheran began to hold regular English-language services for the first time. “My dad spoke, wrote, and read Danish, so he continued with Danish services for some time. In the 1950s, I believe, they became monthly, and probably beginning in the late 1950s, they were only on special occasions. However, during the winter months, my parents hosted Danish meetings in our home where he would give a Danish lecture (The Danes loved lectures!). They would sing Danish hymns and pray the Lord’s Prayer in Danish. I loved those meetings because I would come home from school in time to have one of my many “grandmothers” usher me through the many choices on the table of their famous open-faced sandwiches, æblekage (apple dessert), kringle (coffee cake), and små kager (cookies). We never needed much for supper those nights!”

Asta’s mother was one of the cooks whose recipes appeared in the English Ladies Aid cookbooks. (Bethlehem still advertises two heritage cookbooks on its website). The 1958 version includes her mother’s famous coffee cake recipe, but just barely. The cookbook committee had forgotten to get the recipe until just before press time! “So, they frantically called my mother. ‘Recipe?’ my mother responded. The joke was she usually made things ‘out of her head’ as she would say, without measuring…often adding ‘much sawdust, of course!’ She got busy and mixed up the coffee cake, measuring as she went, and gave them the recipe which went to print long before the coffee cake was done rising and baking. She was relieved when it turned out good. I was 12 or 13. Strange the things we remember…”

Asta’s fondest memories involve singing. “We wouldn’t think of having a Sunday school teachers’ meeting, council meeting, Sunday school, or young people’s meeting without singing,” Asta recalls. “But the best was summer school—known today as Vacation Bible School and modeled after Danish folk schools. We sang at the top of our lungs out of World of Song, a book that contained many songs and hymns translated from the Danish. Part of the joy of our singing was that we didn’t separate fun from religion. It seems like learning these songs added to our philosophy of life—’Happiness never depends on success won in the struggle for glory or pleasure’ (a Danish song).” Summer school also included “religious studies, art/craft projects, drama productions of our own creation, eating, ball games, folk dancing, and Danish gymnastics. Oh, and yes! There was story telling—often Hans Christian Andersen folk tales. My dad was the champion storyteller. Every year, the kids would beg my dad to tell the story of ‘Klods Hans’ [‘Clumsy Hans’].”

Christmas was a particularly special time. “Bethlehem always had their Christmas Eve service at 4 p.m.,” Asta recalls, “and the church was packed. In Askov, every year we would have a community Christmas tree celebration in the Danish Brotherhood Hall a few days after Christmas. There was a huge Christmas tree in the middle of the hall, and we formed several concentric circles around the tree and sang Christmas carols at the top of our lungs. There was always a program. In the afternoon, it would include at least one group of kids playing instruments and one group singing. Maybe someone also read a short story. And, of course, Santa came with some candy and an apple for everyone.”

Many of these traditions are no longer continued at Bethlehem, as the church and the town have become less “Danish” over time. As a life-long church member, Asta understands how “churches can cling so tightly to the past that they are unable or unwilling to focus on the current needs of the community and world they are called to serve.” But her life experience has taught her the value of tradition and heritage.  “Our past history has so much to teach us about our present situation.”

Bethlehem Lutheran was one of 16 churches who participated in Phase 1 of the Preserve Nordic Heritage Churches Project.  They matched project grant funds to waterproof their basement in order to better preserve their church archive.