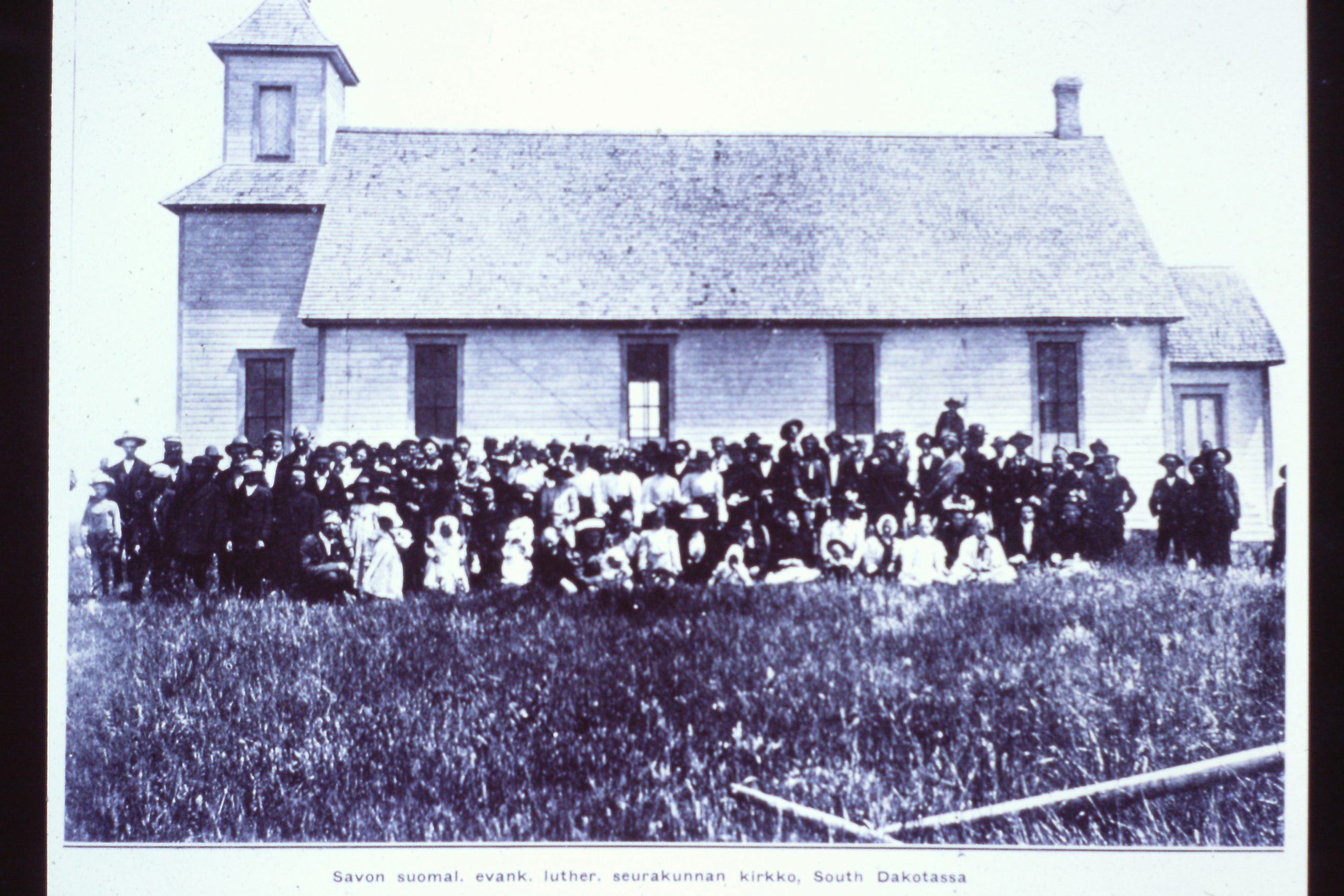 The original Savo Evangelical Lutheran Church, pictured here and built in 1888, was destroyed by a tornado in 1921. Hella Keranen used her creative talents to design a more interesting and wind-resistant building for the new church, dedicated in 1922. Photo courtesy of Carolyn Torma from an old Suomi Synod church history.

I was chatting by phone with the pastor of Savo Evangelical Lutheran Church outside Frederick, South Dakota as part of the Preserve Nordic Heritage Churches Project when I heard something fascinating and surprising: “The church was designed by the minister’s daughter.”

I wanted to learn more.

I imagined a middle-aged spinster who devoted her life to the church.  I was wrong. In excerpts from her memoirs, reprinted in the church’s 125th anniversary history, Hella Keranen Shattuck writes:

“On July 2, 1921, a violent tornado surprised the citizens of Savo Township, Frederick, South Dakota. It completely destroyed the Finnish Lutheran Church in Savo. Plans for a new church were made soon, and Father asked me if I would like to make the ensi piirustukkset (original drawings). He said, “Please make a risti kirkko” (church in shape of a cross). I had seen one, but my imagination went to work and was stimulated with that idea. Also, I wanted a design to resist some of the fierce winds of the prairie land. I had just turned 15 years of age when I started the project. Father promised I would be exempt from dishwashing all summer, as my pay and reward.”

The area where Hella grew up on the border of Brown County, South Dakota, and Dickey County, North Dakota, is known as Little Finland.  Finns began migrating there during the 1880s.  They came directly from Finland and from the mining regions of Michigan, Minnesota, and Wyoming to homestead during the Dakota land boom.  Their first homes were sod huts, but they eventually built a community that had a band, a baseball team, a temperance society, several cooperatives, churches, and a Finn Hall (the latter located directly across the road from the Savo Evangelical Lutheran Church).

Finns were forward-thinking in many ways: the Finn Hall, for example, was a community meeting place that could be used for any “progressive or cultural purpose.” But was the community ready for a teenage girl as the designer of their church?  Her father was perhaps her toughest critic; he encouraged his daughter’s musical talents over her artistic ones. Nonetheless, after she made some rough drawings that suited him, he gave her a “good sturdy drawing board and large sheets of good white paper.” “I was very happy,” she wrote, “because NOW Father was promoting my artistic abilities.”

If she felt any disapproval of her efforts, Hella’s memoir makes little mention of it. (The frugal Finns may have appreciated the fact that her services were free!) She describes the month of work, and the multiple drawings that her father shared with an architect. “I was very very chagrined and sadly disappointed,” she wrote, “that the artistic effect of my original drawing was ruined by lowering of the finished steeple level with the roof line.  Another thing that has been altered is the high window in the front above the door. I had made a round window, but I understand it was changed to the present one due to practical reasons of keeping the rain out. When the church was finished and ready for dedication (October 1922), I was pleased that the construction was made so well. Although my Father did suppress my artistic talents, it was bigger than either one of us, and I realized I had a God given talent.”  And Hella had the last laugh. The church history highlights her role in the church design but makes no mention of the actual name of the architect.

What did Hella Keranen do with those God-given talents?  Hella Keranen Broeske Shattuck (1906-1904) was both a gifted concert pianist and an artist with a 50-year career.  She studied art in Minneapolis and Portland, Oregon, and then, with her first husband, Fritz Broeske, moved to Santa Fe, New Mexico. She traveled the state and fell in love with its landscapes and people, which became the subject for exhibitions, murals, and book illustrations.  Hella became fluent in Spanish and developed a close affinity for both the Hispano and Native American cultures of the region. She featured both prominently in her work.  She met and married her second husband, August Shattuck–an Isleta native and health educator, when living for an extended period at the Isleta Pueblo.  The couple moved to Taos, where she became part of the active arts scene there, and eventually settled in Albuquerque.

Not bad for the teenage daughter of Finnish immigrants who designed her first and only church at age 15!