While woodcarving was a male art form, traditional textiles were the domain of women.  Since the Nordic Churches Project inventory was not field based—but rather relied on existing databases or the Internet–first-hand information about historic textiles in Nordic American heritage churches is sporadic at best.  In general, textiles were produced for practical use, with decorative handwork reserved for special occasions. Quilts, for example, were widely made by Ladies Aid groups in America, but quilting experiences varied in the home countries. In Norway, for example, women used bedclothes of sheepskin and handwoven wool coverlets rather than quilts (Gilbertson and Olsen 2004, 18).  By contrast, Swedish women produced quilts starting in the late eighteenth century, but quilting was downplayed by the influential Svensk Hemslöjd, the Swedish Handicraft Association (founded in 1899), which sought to rediscover and revitalize traditional “peasant” handicrafts in the face of growing industrialization and mass-production. For the Handicraft Association, quilts were not really “Swedish” because fabrics and designs were imported, whereas folk costume, embroidery, and linen weaving were given “the stamp of approval” (Horton 2009, 13-15).

Nordic immigrant women frequently embroidered paraments for the altar and pulpit.  The original cloths were replaced over time or preserved in a church or other museum case. Churches that participated in the Nordic Churches Project often had altar cloths produced by church women.  Hardanger-style embroidery, a type of cutwork traditionally worked with white thread on linen, was a regional style in Norway that became widely popular in the Victorian era.  Patterns were available in various publications. Today, with the revival of interest in folk and ethnic arts, women continue Hardanger-style embroidery, learned via classes, books, or Internet tutorial. 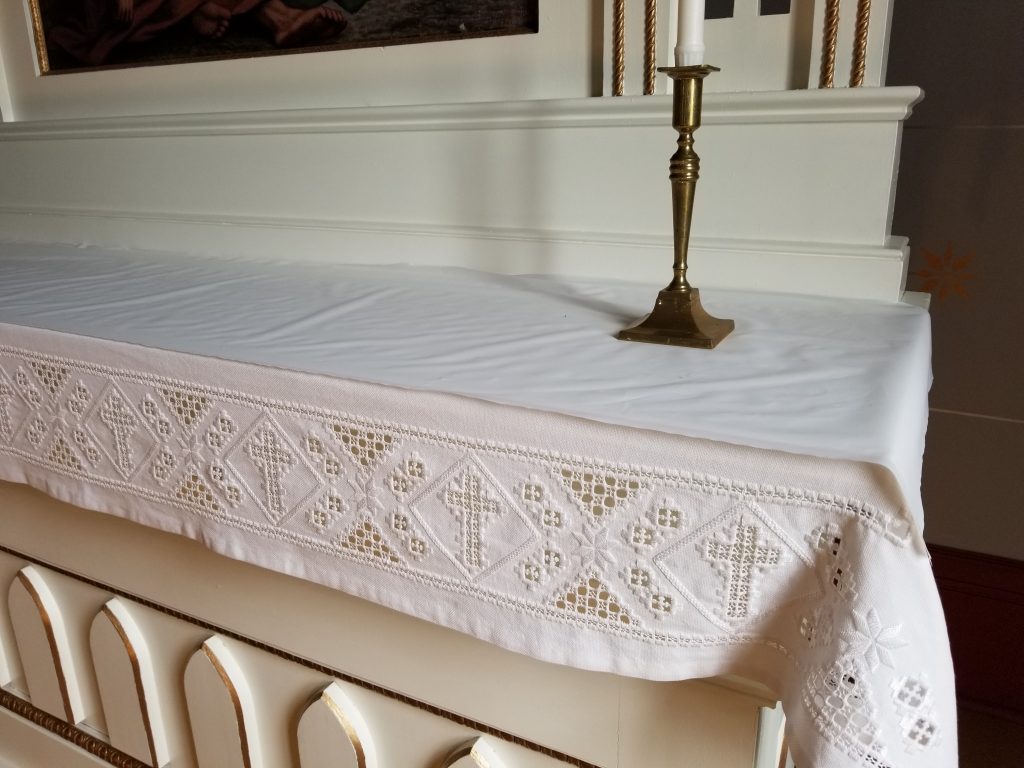 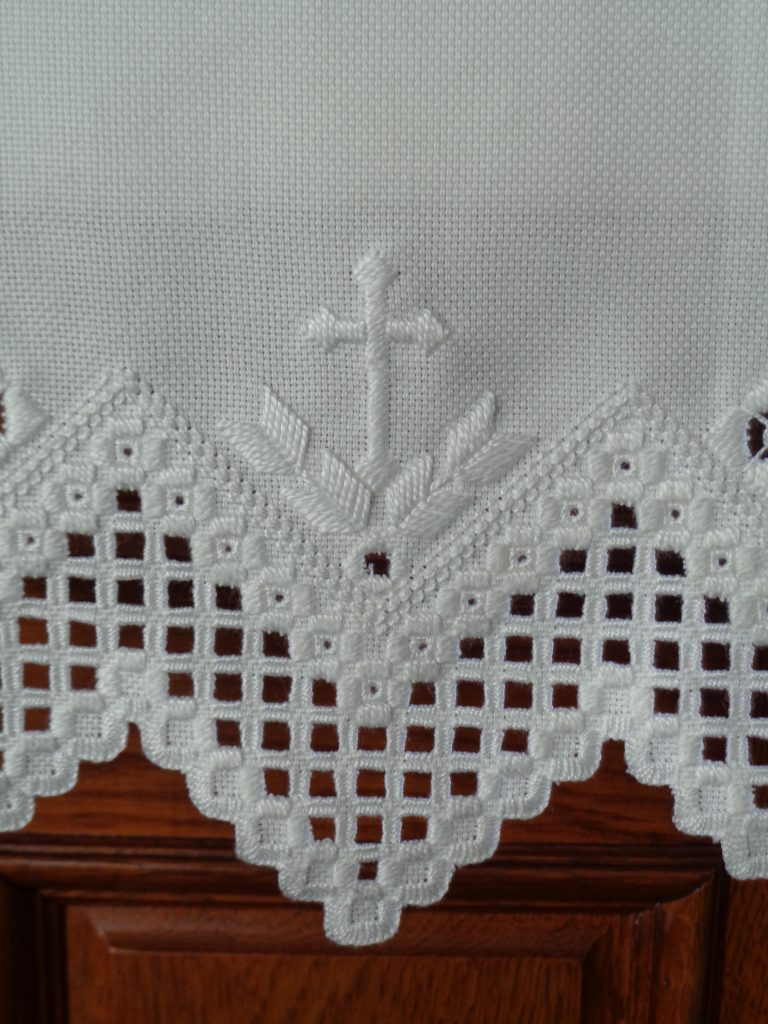 In Nordic American communities, items made for religious rites of passage–for example, hand-made christening gowns, or confirmation and wedding dresses—remained a family heirloom rather than in the care of the church. History display cases found in many churches, however, may include a textile piece gifted back to the church. 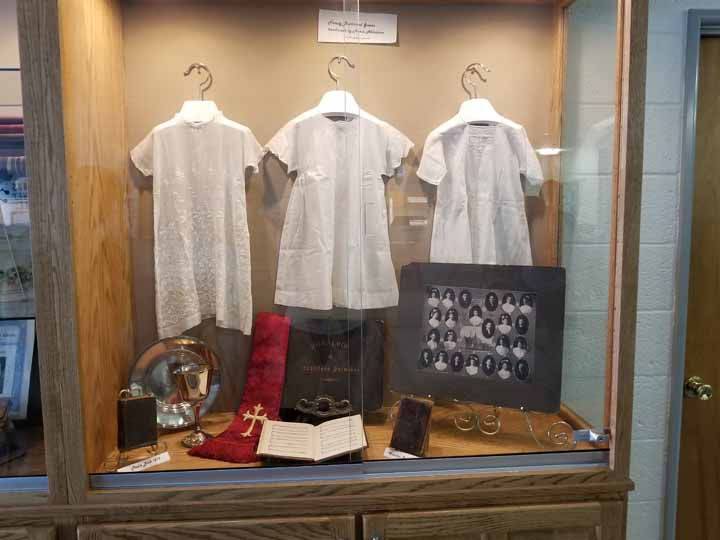 Laurann Gilbertson has written about the close connection of quilts and quiltmaking “to the religious identities of Norwegian-American women and to churches in the Midwest in the late nineteenth and early twentieth centuries. The Lutheran Church was an important institution socially as well as religiously, for many Norwegian-American families. Through Kvindeforening, or Ladies Aid, women learned to make quilts, practiced English, built and maintained social relationships, and sold quilts and textiles to fund local, national, and global projects” (Gilbertson 2009, 1). Both the Vesterheim Norwegian-American Museum and the Museum of Danish America have examples of Ladies Aid quilts in their collections.  Most were made as fundraisers or as gifts commemorating a special occasion, such as the retirement of a pastor. 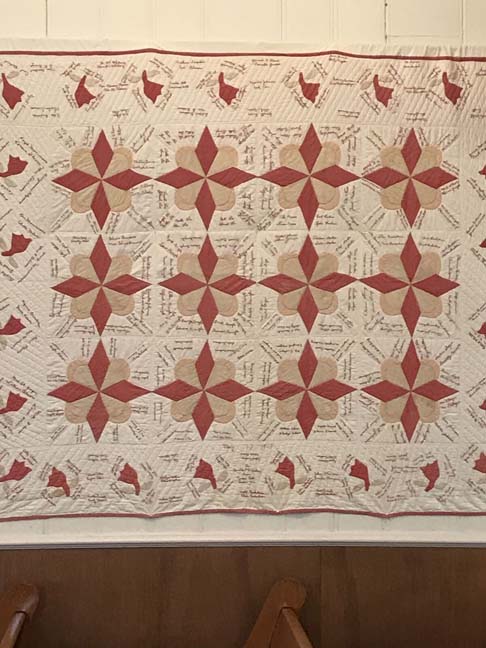 Caption: 1916-17 Signature “Remembrance” quilt by the Ladies Aid of Our Savior’s Lutheran, Rice Lake, Wisconsin.  Members paid 10 cents per signature, and then the quilt was given to a departing pastor. It was returned to the church in 1985. Photo courtesy of the church.

Quiltmaking is not unique to Norwegian American church women, or to any particular ethnic or geographic group, but it remains one of the most widespread textile traditions in the churches we surveyed, as evidenced by the frequent mention of quilt groups on church websites, and the many church Facebook photos of quilts to be blessed and donated. Because quilts are made to be given away, few remain at their churches of origin.  Those that do are often special quits celebrating a church anniversary or some other event. 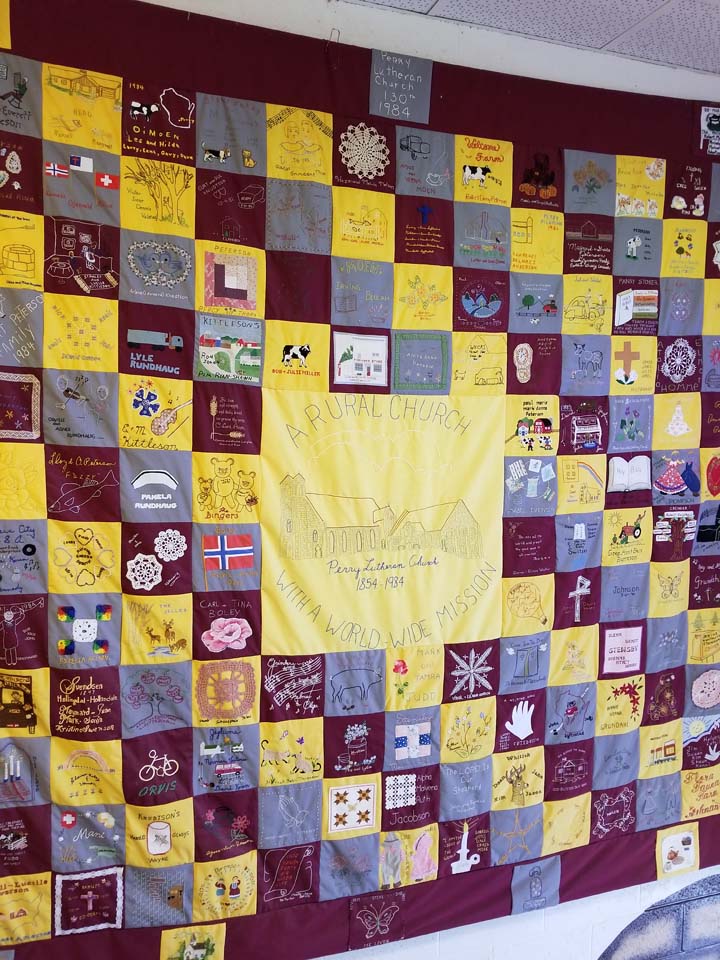 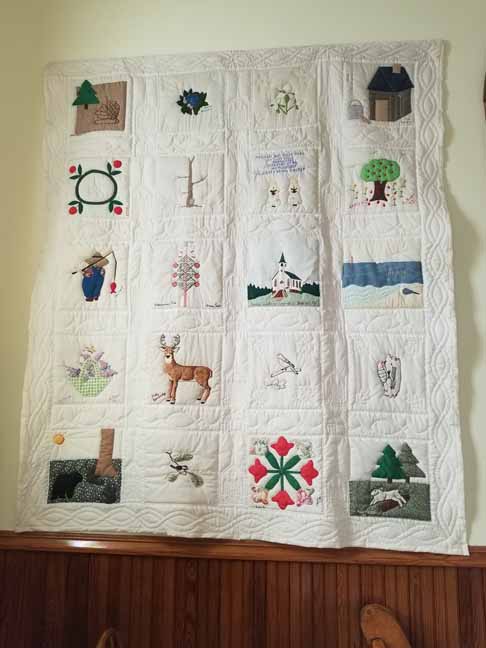 Caption: This appliqué block quilt, finished in 1996, was originally made as a fundraiser by the Brevort Michigan Women’s Group.  The group became so attached to it that they decided to display it at Trinity Lutheran Church.  Note that one block contains an image of the church, and another the annual Midsummer Pole Festival, which takes place on church grounds. Photo by Laurie K. Sommers.