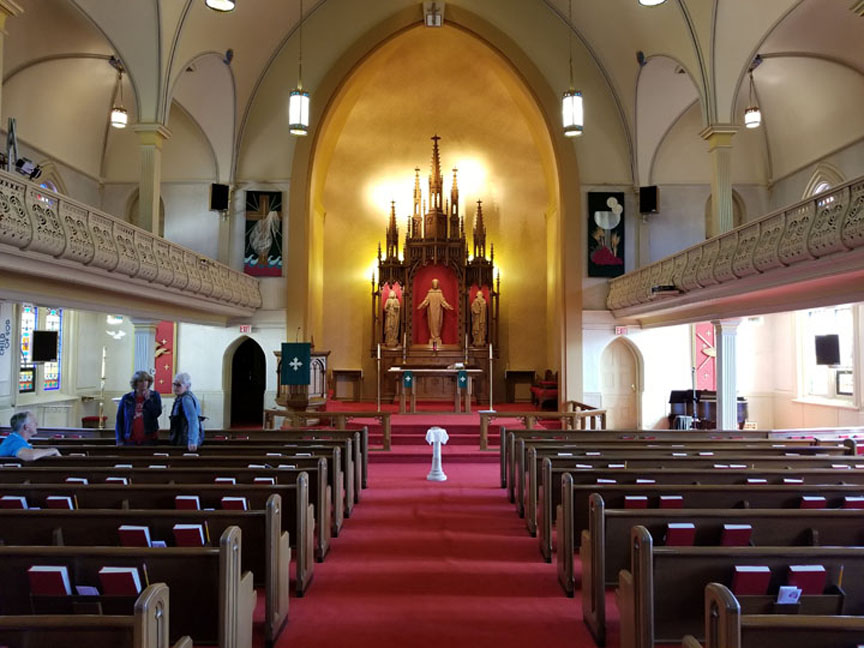 The congregation of Augustana Lutheran Church in Sioux City, Iowa, was grateful.  It was 1919.  World War 1 was finally over, and the young people of the church had come home safe and sound.  As a gift of thanksgiving to God for war’s end and the safe return, they installed a soaring Gothic “Altar of Peace.” The statues framing the central niche were large oak images of St. John and Moses, created by the noted German American sculptor and woodcarver, Alois Lang.  The craftsmen who had built Augustana Lutheran in 1890 were of Swedish descent, and the church was proud of its Swedish heritage. But for their Altar of Peace, they commissioned—not a fellow Swedish American—but rather the leading religious wood carver of the era, a man born into the famed woodcarving tradition of Oberammergau, Bavaria (also known for its passion play).

In 1903, Alois Lang (1872-1954) became head of the Ecclesiastical Art and Wood Carving Department of American Seating Company, then based in Chicago. He completed many commissions for churches across the country, the most famous of which is “The Last Supper” for Union Avenue Christian Church in St. Louis, Missouri. Lang is among the artists widely credited with introducing the medieval art of ecclesiastical carving to the United States. He first came to America in 1890, after studying and apprenticing in Oberammergau.  Prior to his employment at American Seating, he worked under the tutelage of his cousin, John Kirkmeyer, in Boston, and for a year with the master carver Fortinato Galli in Florence, Italy.  His tenure with  American Seating was long and productive.

Lang’s commission for Augustana Lutheran may be his only one for a Nordic American church. According to Augustana’s published history, “The altar was paid for by donations from the members of the congregation, who felt such enthusiasm for the project that the money was raised before it was needed and had to be put into Liberty Bonds. Originally, the center niche contained the painting “He is Risen,” a reproduction of the original by Norwegian Axel Ender. The painting was moved to the wall of the south side of the nave in 1970, when the Christus statue was installed. The oak Christus statue, carved in Italy, depicts not a crucified Jesus, but a Savior with his hands palm-upwards in gentle invitation” (Augustana Lutheran Church, A Brief History, by Marion Moline and Jeanne Emmons, p.12).

Did Augustana Lutheran deliberately choose a German artisan for their Altar of Peace, at a time when anti-German sentiment was rampant?  Perhaps motivations don’t really matter. What does matter is that artistry and beauty transcend hate. We all need symbols of peace and thanksgiving. And Augustana Lutheran’s Altar of Peace is a lasting inspiration.

Caption: Altar of Peace detail; the center carving was done in Italy in 1970. On either side stand Lang’s 1919 statues of Moses and St. John. Photo by Laurie K. Sommers.